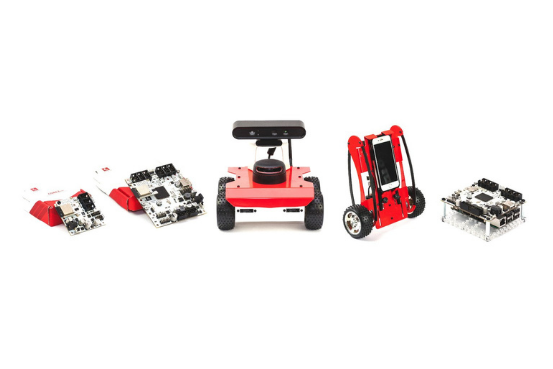 They are a research and development company that makes mobile robot systems. Husarion's goods are mostly employed by industrial research institutes and universities of technology. Customers may quickly construct autonomous systems for a variety of applications by combining their robots with a comprehensive range of programming tools.

Husarion also offers a one-of-a-kind technology that allows clients to connect their devices to the internet with little delay. Husarnet, a peer-to-peer Virtual LAN network, is the name of the product. It's mostly for self-driving cars, robots, drones, and other Industry 4.0 applications. However, the spectrum of applications is far broader.

Mobile and web developers around the world can innovate and create completely new services that improve our everyday life. It all happens because of the mature, easy to use tools and frameworks. Husarion focuses on creating similar, friendly and a simple environment for robot development to allow even a beginner engineers to build advanced robots and take a part in the next industrial revolution.

The company was created in late 2013 by a group of long-time friends who were graduates of AGH University of Science and Technology in Krakow, Poland's most prestigious technical university. Their team includes experts in a variety of engineering domains, including hardware design, embedded software programming, online and mobile app development, and secure device networking. They are a young, skilled, and energetic group of engineers who enjoy building robots and assisting others in doing so.

How it is built?

Husarion is a development platform for autonomous robotics.  It is a tool kit for developing and testing autonomous systems. Their products have many functions:

RoboCORE is a sophisticated controller that may be used to create both complex and basic mechatronic systems. This is built on an STM32F4 microcontroller for real-time, low-level operations (such as motor control) and a single board computer running Linux for high-level functions such as connecting to the Internet platform, running ROS, and so on. We provide a robotic C++ framework (that can interface with ROS) that allows you to easily construct low-level control algorithms in conjunction with RoboCORE.

Because a web-based integrated development environment is accessible, the Robo CORE platform is an Internet platform for controlling all Robo CORE-based devices and developing their software. The Robo CORE platform allows for secure data and video signal communications, making it simple to build telepresence robots. You have complete control over the robot's actions as well as its user interface.

Ralph is a self-balancing telepresence robot built on RoboCORE. Ralph's source code is open sourced on platform.robocore.io, allowing you to quickly add new functions. Ralph only needs a couple of the various RoboCORE ports, therefore this structure is quite expandable.

What makes Husarion's product unique? It is a comprehensive solution for companies and developers who produce many mechatronic Internet of Things products, rather than a single product. Mechatronics is a term that refers to the combination of mechanics and electronics. This is a broader notion than robotics, because it covers things like Internet-connected door locks and electric roller blinds, in addition to robotic lawnmowers and telepresence robots.

1. Reference hardware, such as CORE2, Robo CORE and other available in the near future,

3. Programming framework to write a code that runs on hardware and communicate with a cloud.

Because users have access to numerous examples, a professional Real-Time OS-based C++11 framework, and a wide range of hardware, creating a working prototype is a breeze.

The product is aimed not only at makers, but also at businesses. They could useCORE2 to quickly prototype a concept, and Husarion would assist them in developing the prototype into a mass-production-ready version. This manner, they'd be able to produce a CORE2 version that was tailored to their product.