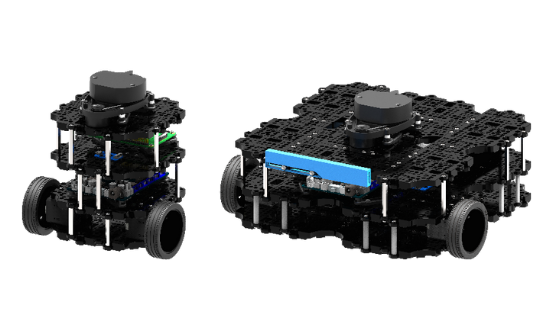 History of the Robot

As the forefathers of the TurtleBot, Melonee and Tully originally did not intend to develop a product but rather to design a baseline robot and publish the designs. It all started when one day Melonee decided to attach a Kinect to an iRobot Create and what followed was writing Create drivers for ROS and lowering the barrier to entry for ROS. This enabled them to use ROS on a new mobile robotics platform of their own rather than on a big PR2, which eventually led to the birth of the TurtleBot. This became the first TurtleBot, also called ‘TurtleBot1’, and contained an iRobot Create base, a 3,000 mAh battery pack, a TurtleBot power board with gyro, a Kinect sensor, an Asus 1215N laptop with a dual-core processor, and a hardware mounting kit used for assembly and additions of future sensors.

Two years later, this prototype was replaced by the newly developed TurtleBot2. This TurtleBot used a different base from its predecessorto increase overall efficiency. The new YUJIN Kobuki base only needed a 2200mAh battery pack. The TurtleBot once again incorporated a Kinect sensor and continued to run on the same Asus hardware. The fast charging dock was another novelty of this robot and the hardware mounting kit provided quicker assembly as it used a single allen wrench.

Being the smallest and cheapest of its generation,TurtleBot3 was launched in 2017 as a result of the collaboration with ROBOTISand the Open Source Robotics Foundation. This collaboration made the use of Dynamixel motors possible for the third TurtleBot, which gives it an outstanding structural expansion capability. This new robot can be customized by the users thanks to its modular plates and it comes in three different sizes: small size Burger, medium size Waffle, and the Waffle Pi. As the youngest member of its family (for now), TurtleBot3 uses an 1800 mAh battery pack for its two Dynamixel motors, has a 360-degree Lidar, a camera (RealSenseor Raspberry Pi depending on the model), and an SBC (Raspberry Pi 3 or IntelJoule 570x).

TurtleBot’s chief technology is SLAM(simultaneous localization and mapping) and Navigation. This technology makes the robot suitable to operate as a home service robot. TurtleBot software for this technology is written mostly in C++ and Python. The robot’s software is essentially a downloadable SDK that runs on ROS and its development environment harbours libraries for visualization, planning, perception, control, and error handling as well as demo applications. The TurtleBot software also supports a remote-control option where in a laptop, game pad, or a smartphone can be used to control the robot.

Thanks to its SLAM algorithms, TurtleBot can be used to build a map of a given setting and drive around it. This autonomous navigation feature is also coupled with real-time obstacle avoidance. The TurtleBot can also follow a person’s movements as they enter in or exit out of a room. The robot,moreover, incorporates ROS arm navigation features and an arm attachment that has been developed for moving and manipulating objects such as wooden blocks.Its uses further include a range of functions varying from seeing in 3D and creating applications to aiding activities in labs, classrooms, and hackathons as it is a perfect source of learning Linux and ROS.

Riders is an online education and competition platform. There are a number of real robots in Riders. Turtle bot is only one of them. You can come and join Riders to learn and compete as well as to code robots like Turtle Bot.

In real life, this robot has a battery. It runs with battery for about 20 minutes, meaning that it has a constraint. On the other hand, With Riders' simulation, there is no such time constraint; you can use it as much as you want!

Most Used Programming Languages in the World
Tags
robotics
Try Riders for free!
Access to Demo Classroom
← Back to blog
TR